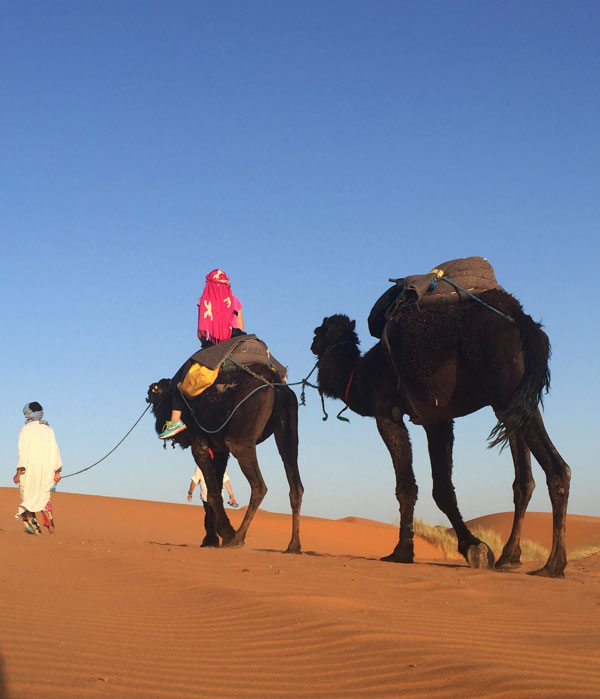 If you told me when I agreed to go to Morocco with Katherine I’d a) ride a camel and b) sleep in a tent in the Sahara Desert I would never have believed it.

Well, travel certainly is about growing and getting out of your comfort zone and that’s exactly what we did when we took a Camel Trek into the Sahara Desert. 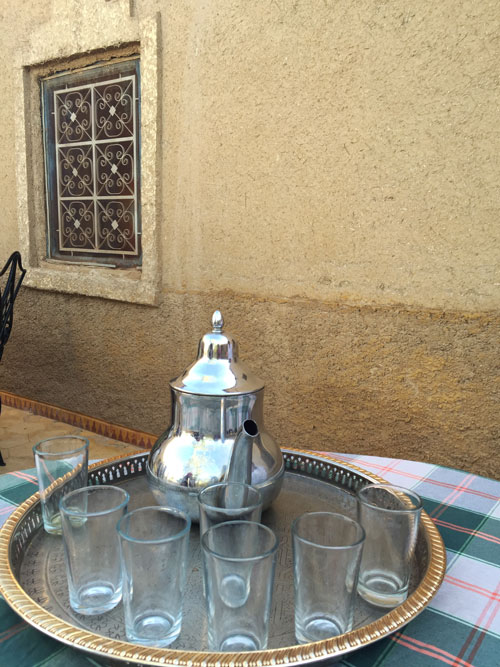 What to expect: For starters, we were told to bring a small bag of items for the overnight trek and stay. To me small means a tote or in my case a Longchamp with PJ’s, a change of clothes for tomorrow and some toiletries. Well, apparently most people don’t bring that much so no surprise I packed on the heavier side! It worked out ok as my camel did great hauling the gear and I felt perfectly prepared for the overnight desert trek. 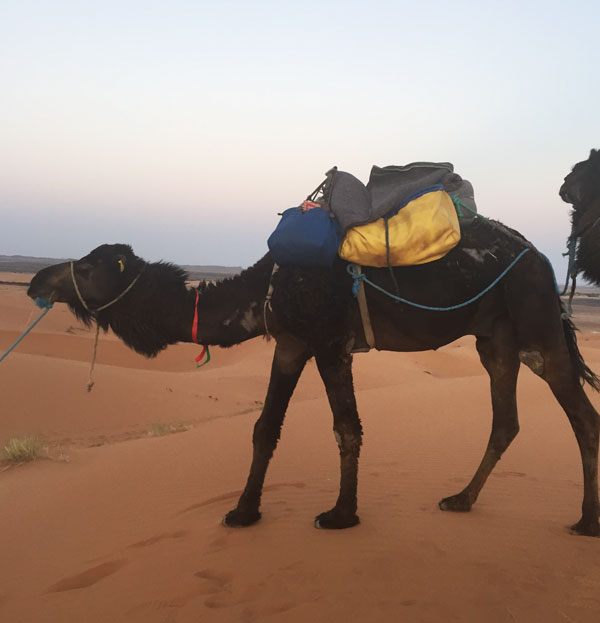 Our gear, my bag was the small blue one. Like I said, pack light. 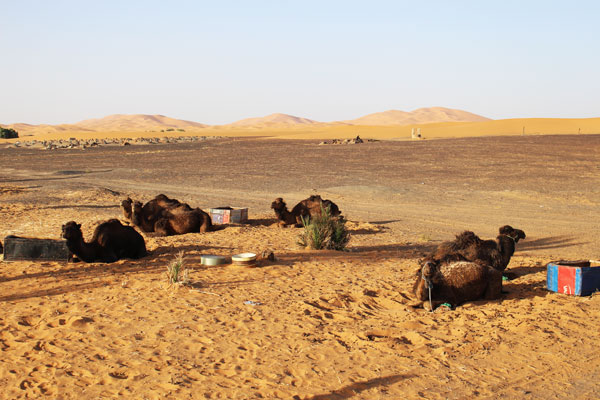 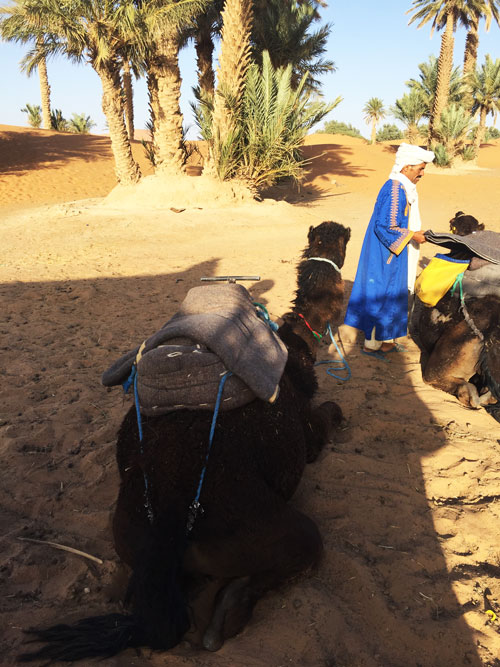 Getting the camels ready to depart…. 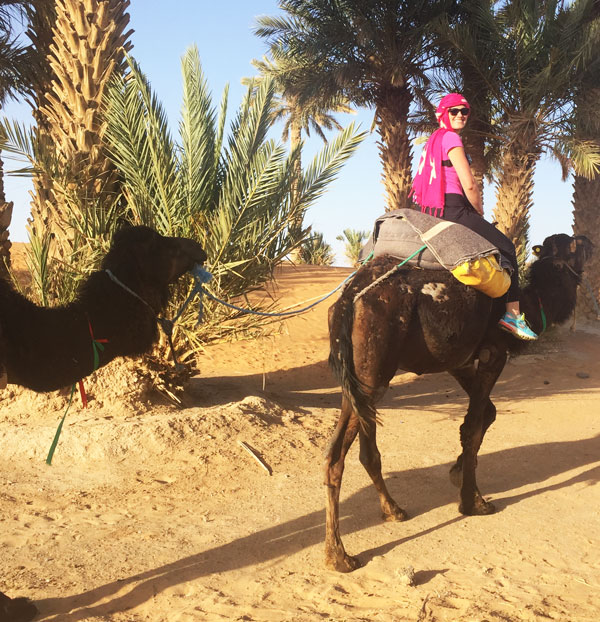 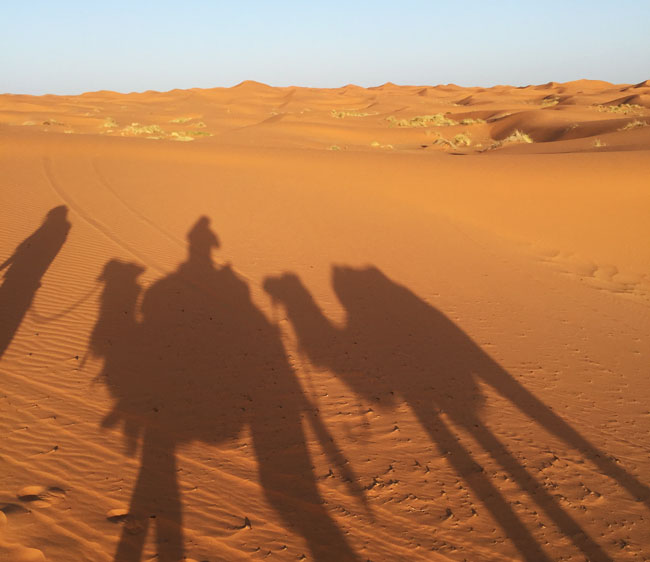 Would I recommend this and would I do it again: I would absolutely recommend if you make it to Morocco to do a camel trek. A few suggestions would be to look into the trek organizer to find out if you’re going with a larger group or like in our case, it was just myself and Katherine on the trek with our guide Mohammed (who was fabulous who we spent 4 days exploring Morocco with him), the local Mohammed (aka, the camel herder almost) and two other men that lived at the camp as guests came and went. Yea in case you just understood what I said, it was Katherine and I alone in the middle of the Sahara Desert with four men we barely knew. Not trying to scare you, but I don’t think either of us realized we weren’t going to be with a large group of travelers until we headed out into the dessert. Did we survive? Absolutely. Were we safe and well taken care of. Yes. Did I feel safe that evening or was it a bit uncomfortable. The latter. I never realized being a woman how much we take for granted having a door that locks or choosing your surroundings where you feel safe. Anyway, just a good travel lesson for me and my future adventures. Either go with a man or book group trips for outings where you’re in a desolate spot you’re unfamiliar with and would prefer a larger group of people (and women) surrounding you during the over night stay or long adventure. 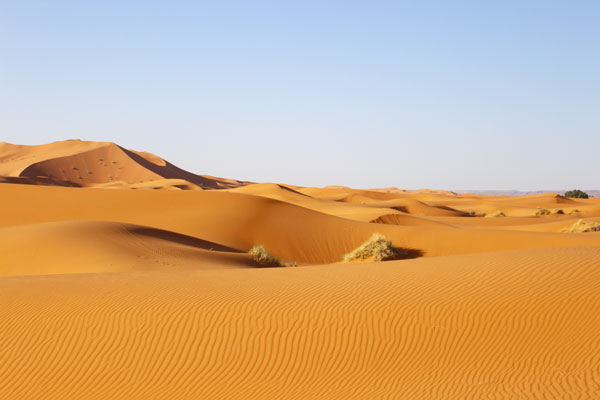 What does the trek involve: In our case, we arrived around 5pm and were told it was an hour or so (note the so part) trek to the camp. After over an hour and a half and the sun starting to set, Katherine and I were worried we were either lost or not as close to camp as we were told. Just as the sun was setting we spotted the tented white camp. I have never been so happy to see tents.  As you probably know by now, I’m not really a camper. I “glamp”,  but camping isn’t really my thing. Regardless, I was in store for a night under the Sahara Desert stars, some camp food and hanging with the camels. Boy was this going to be a lifetime adventure I would never forget. 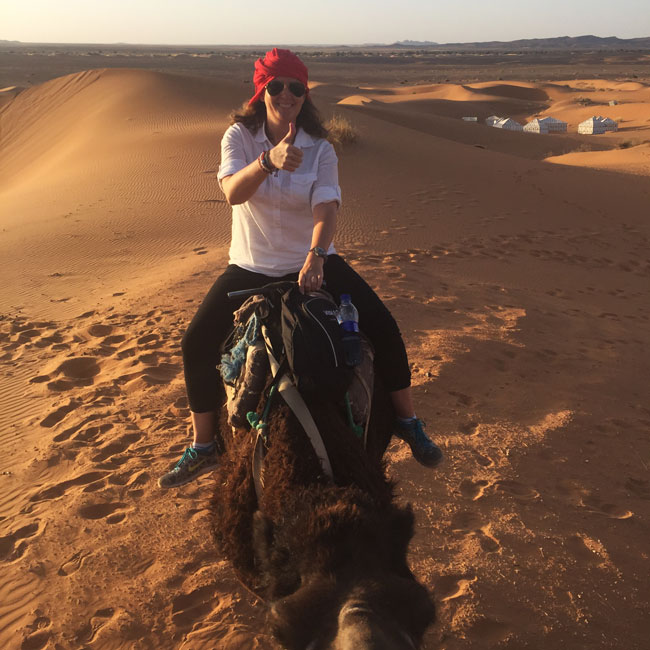 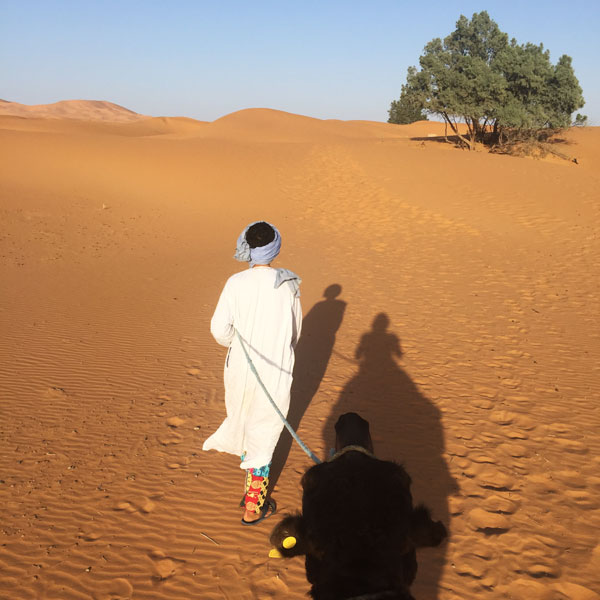 Our Guide Mohammed leading us into the desert 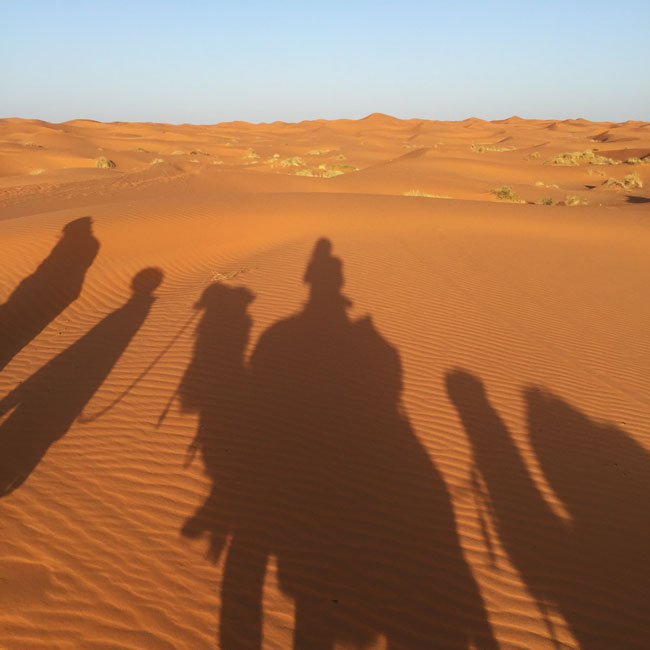 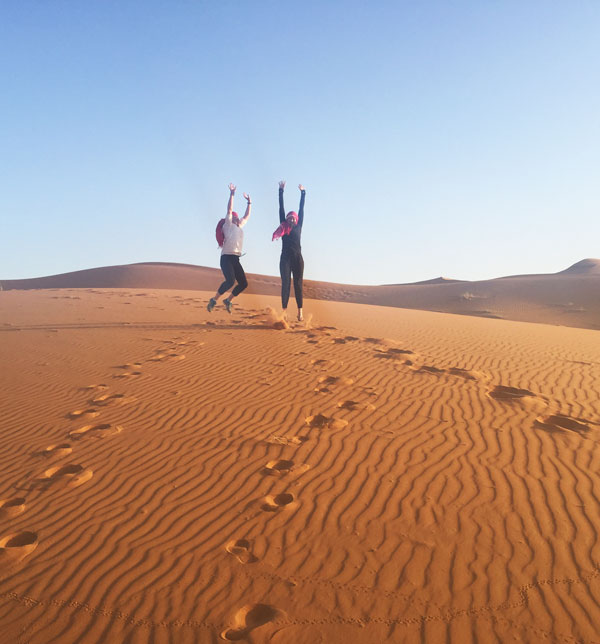 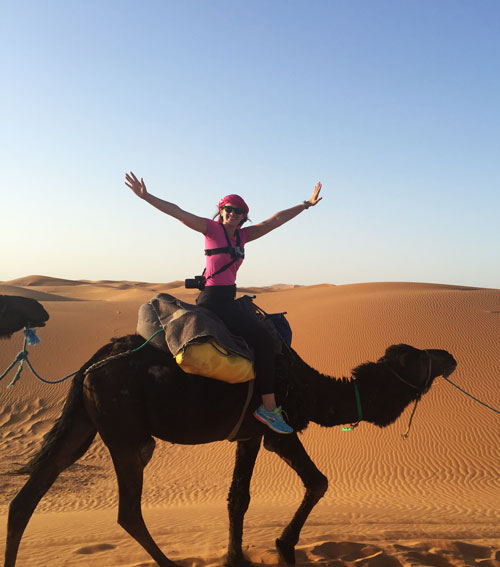 I’m so excited this adventure has begun! Go Pro, Camera and gear in tack. 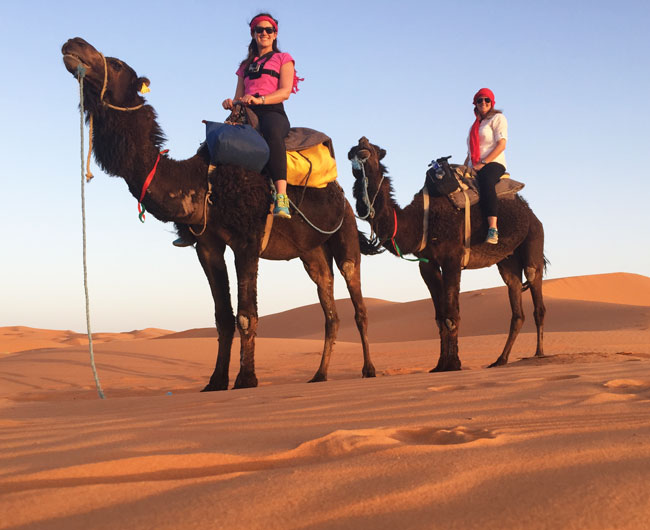 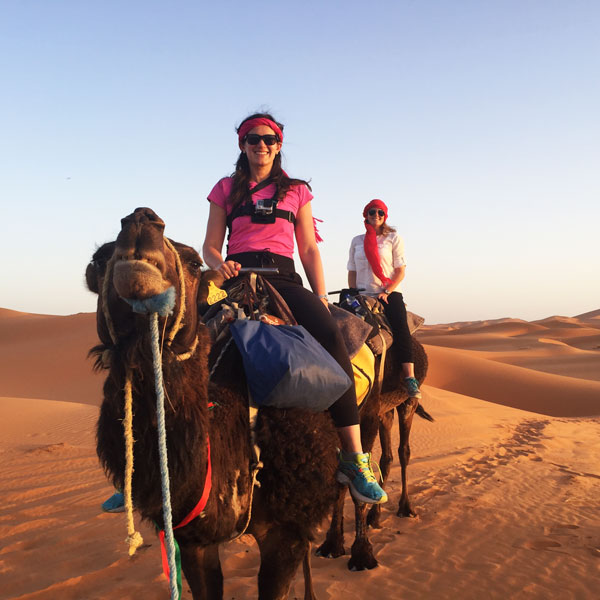 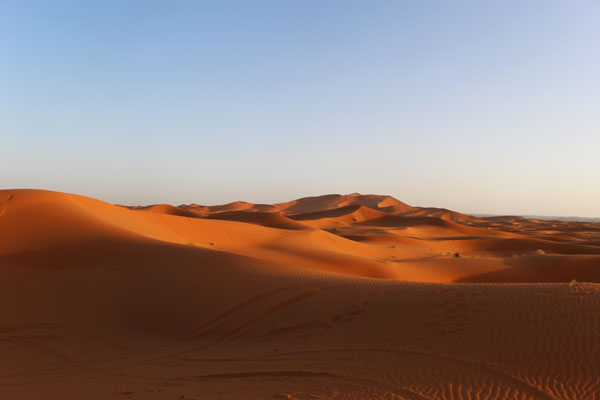 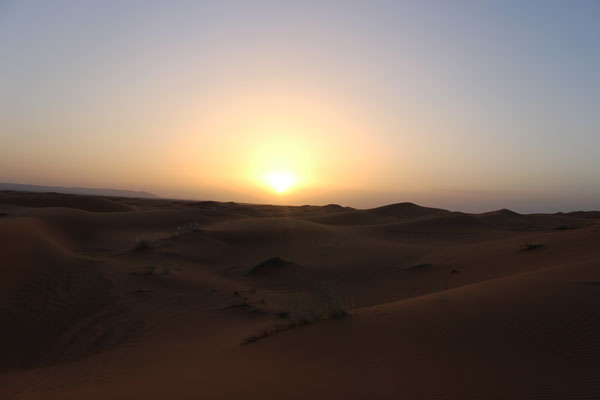 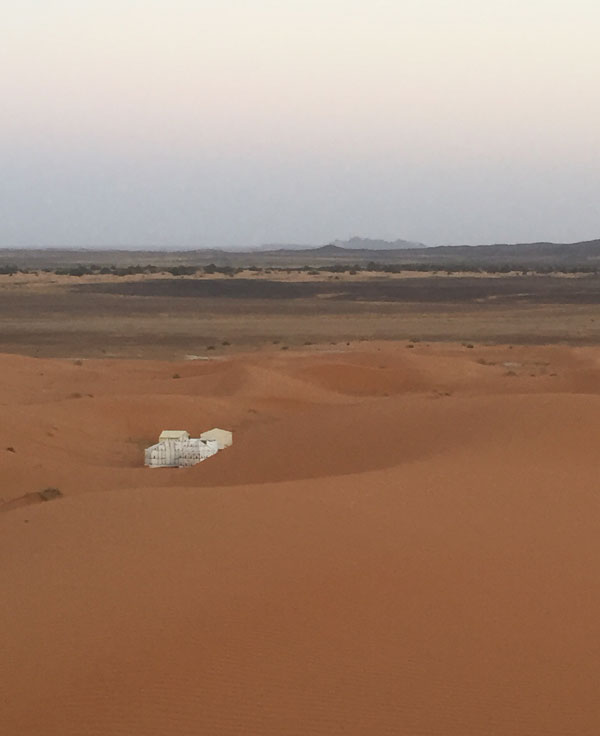 Our camp. I have never been so happy to spot a tented camp in the middle of nowhere! 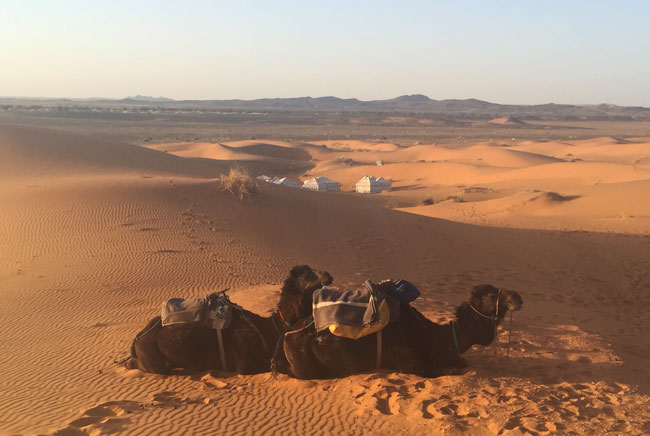 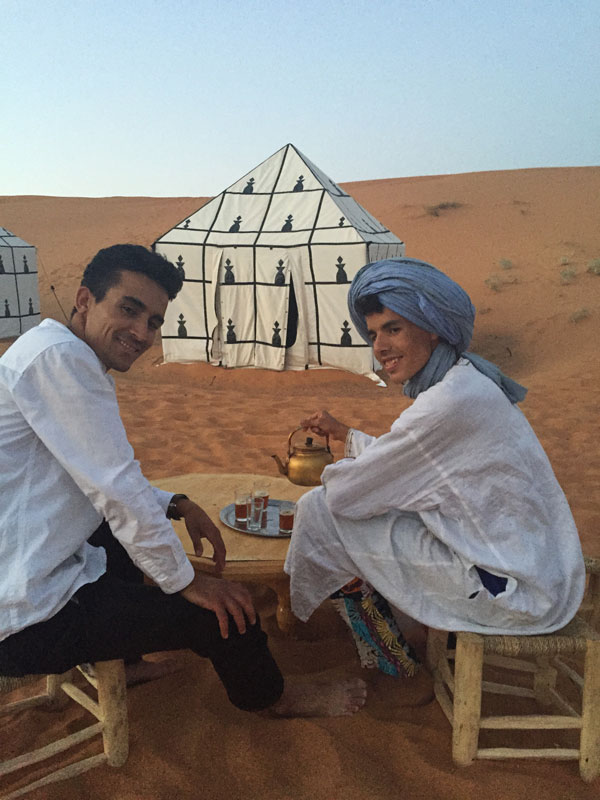 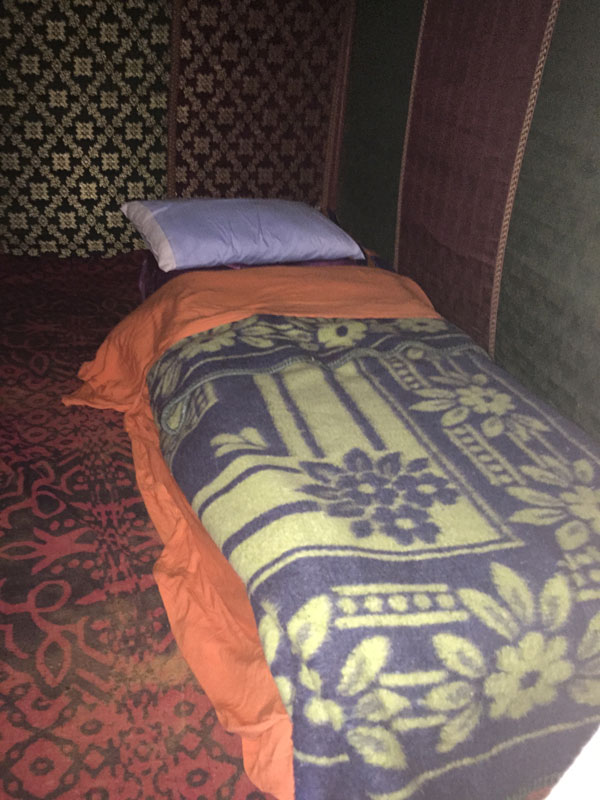 Our bedroom for the evening inside our cozy little tent 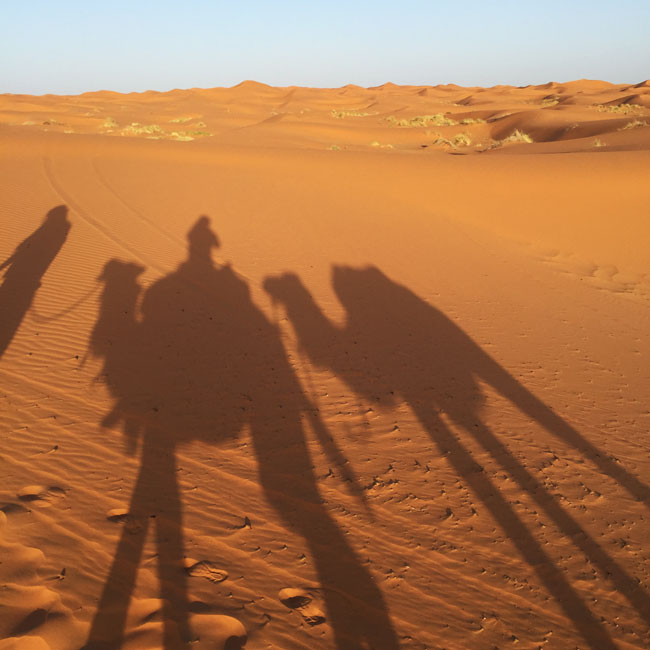