“Come quickly, I am drinking the stars!” These words are often attributed to Dom Pierre Pérignon, a Benedictine monk & cellarmaster of the abbey at Hautvilliers in the late 18th century, who is widely credited with inventing champagne. While the quote may or not be the monk’s actual words, there’s no doubt that Dom Pérignon helped create the sparkling wine that has entranced everyone from Napoleon Bonaparte to Winston Churchill, and, well, me! And I have to admit, for my first visit to Champagne, France, it was quite fitting that the first maison I visited was Dom Perignon. One of the region’s most storied and celebrated houses, its namesake monk established the principles of modern champagne-making, and as such, this humble abby in a small town near Éperney is commonly regarded as the birthplace of champagne. 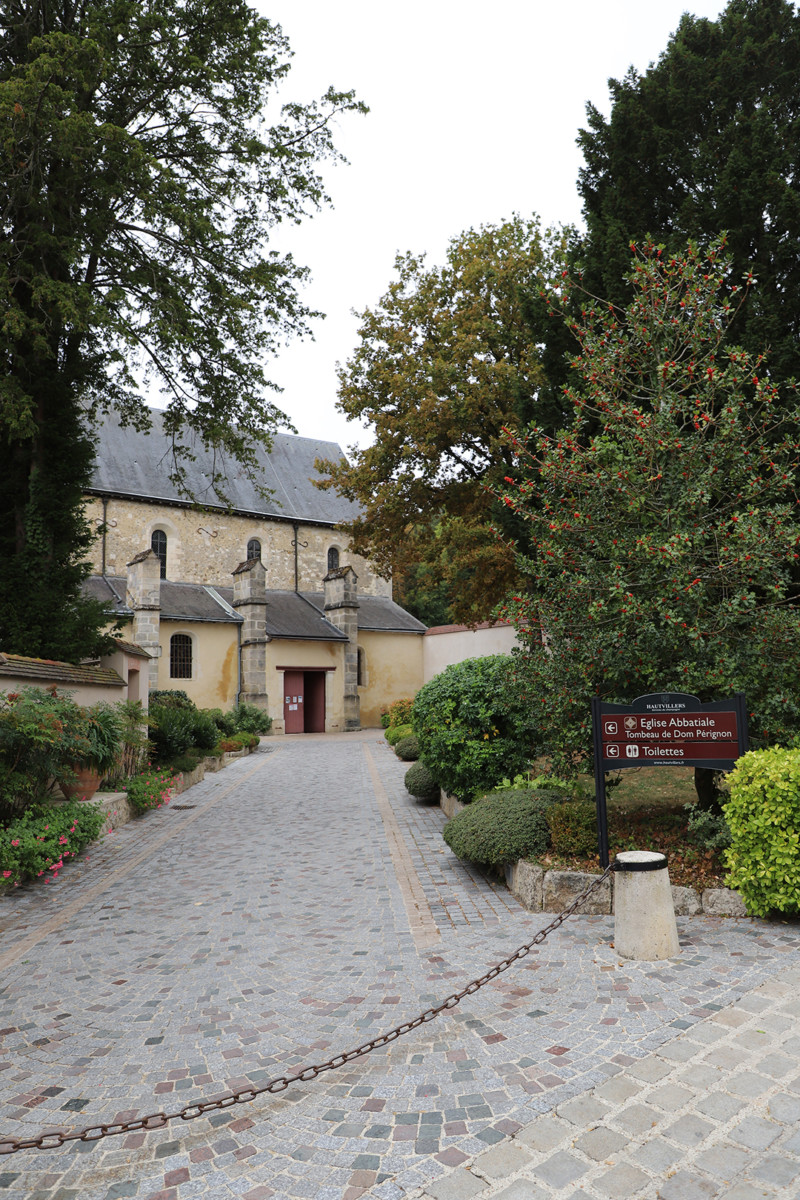 The Abbey of Abbatiale where Dom Pierre Pérignon was a monk and is now buried.  The first stop on a tour of Maison Dom Perignon is here to get an understanding of the rich history of Pierre Pérignon and the brand. 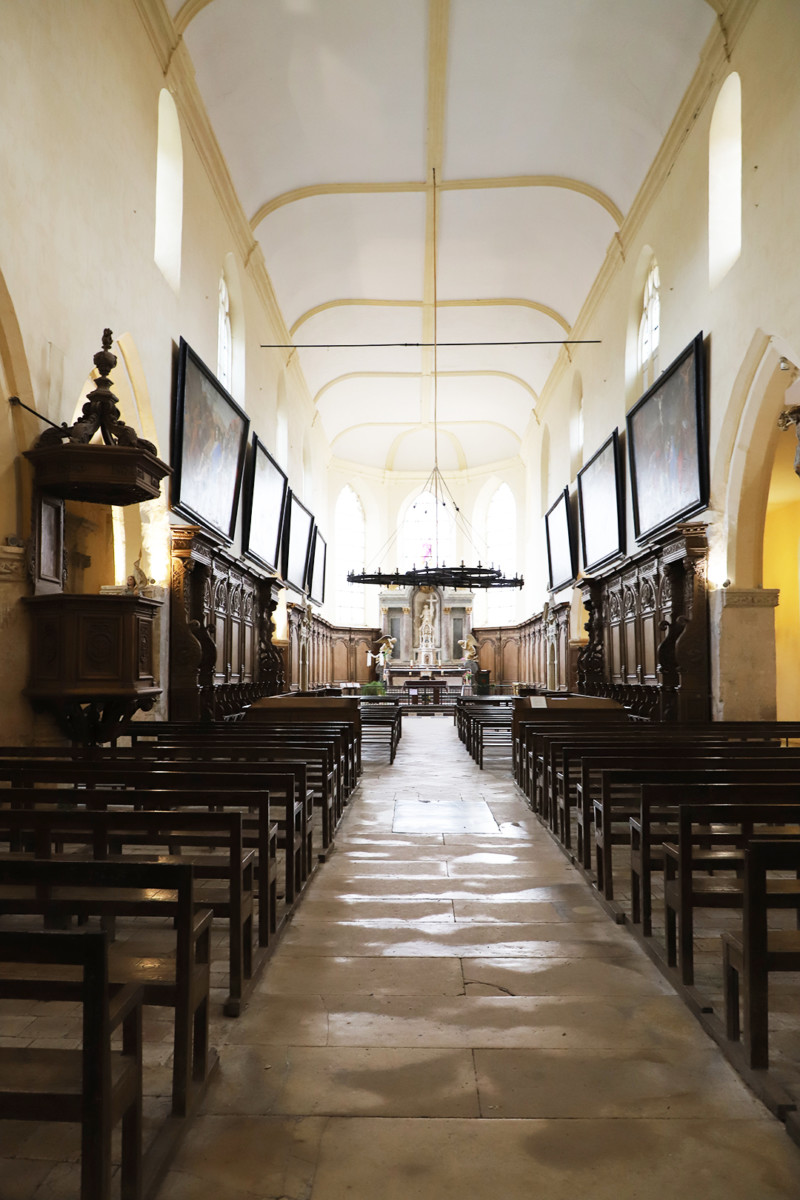 The interior of the abbey – at the foot of the altar stairs is Dom Pierre Pérignon’s gravemarker. 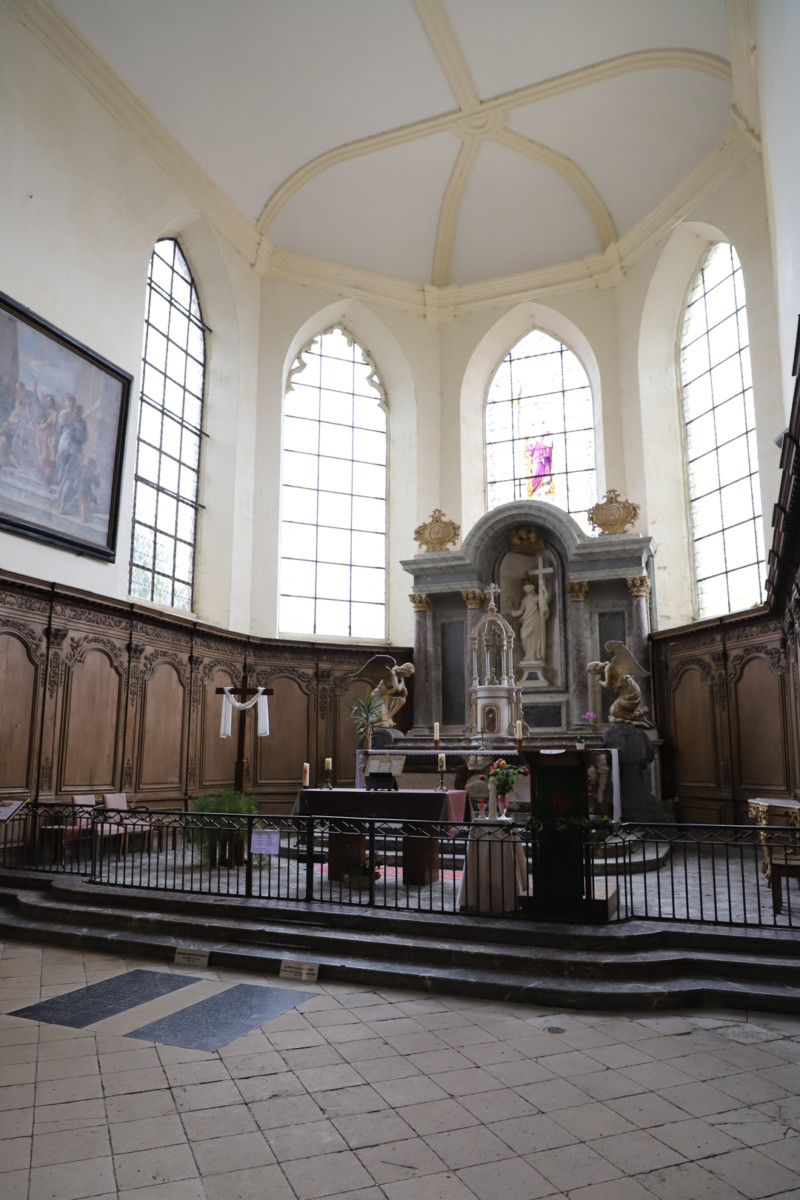 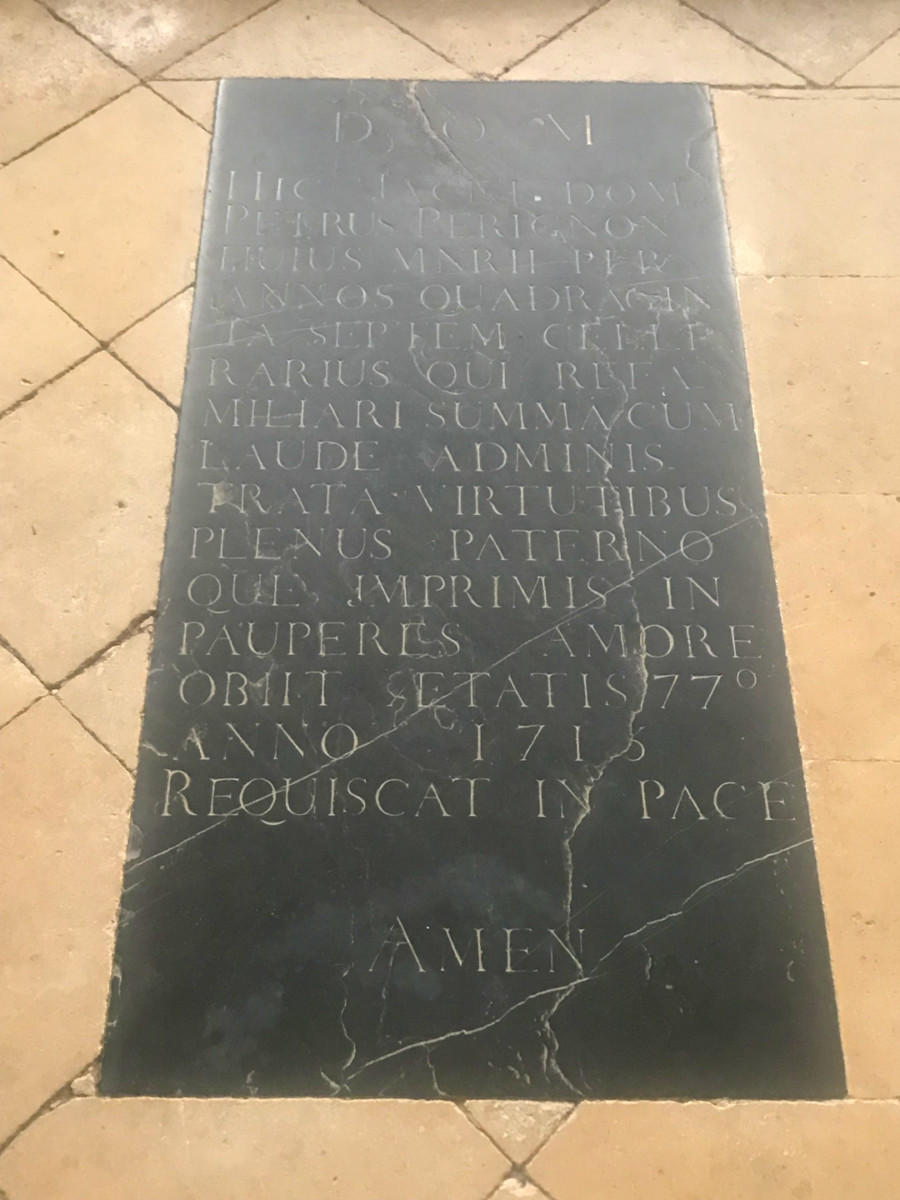 While the man Dom Pérignon passed away in 1715, after contributing greatly to turning champagne into what it is today, the brand that bears his name wasn’t launched commercially until 1936. The brand was launched by Robert-Jean de Vogué in 1936 as the first commercially sold brut prestige cuvee, ‘Dom Perignon,’ using wine from the 1921 vintage. (Another brand, Louis Roederer was producing Cristal prestige cuvee in 1876, but it was unrecognizable as modern champagne, and was not commercially available.) 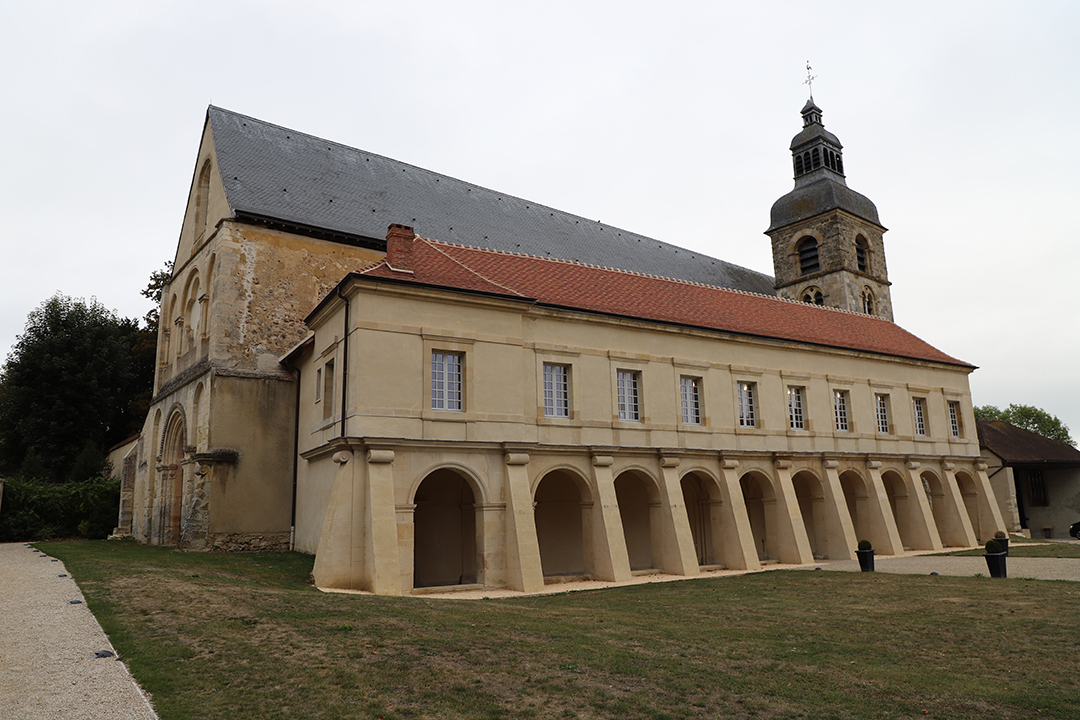 Views of the abbey on the far back and then the smaller building in front is where I enjoyed a tasting with Winemaker Nicholas. Read more about the Dom Perignon Champagne tasting I enjoyed on the blog soon. 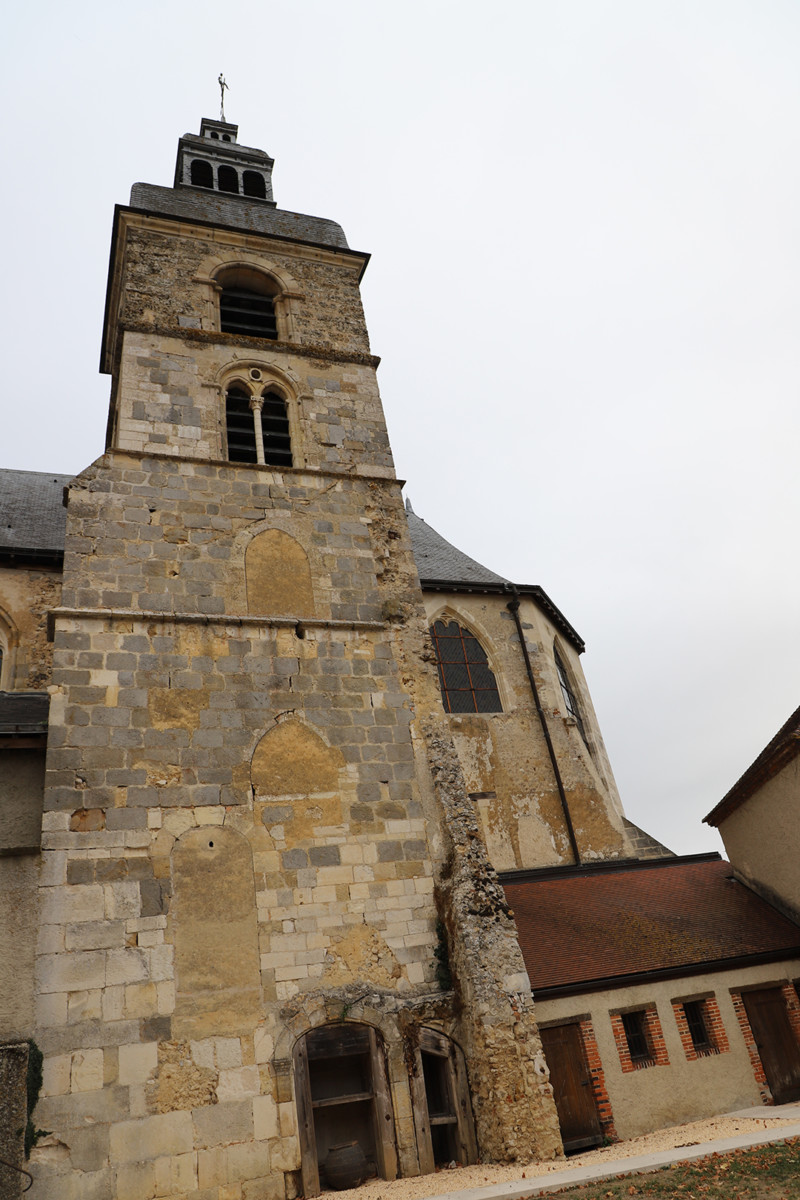 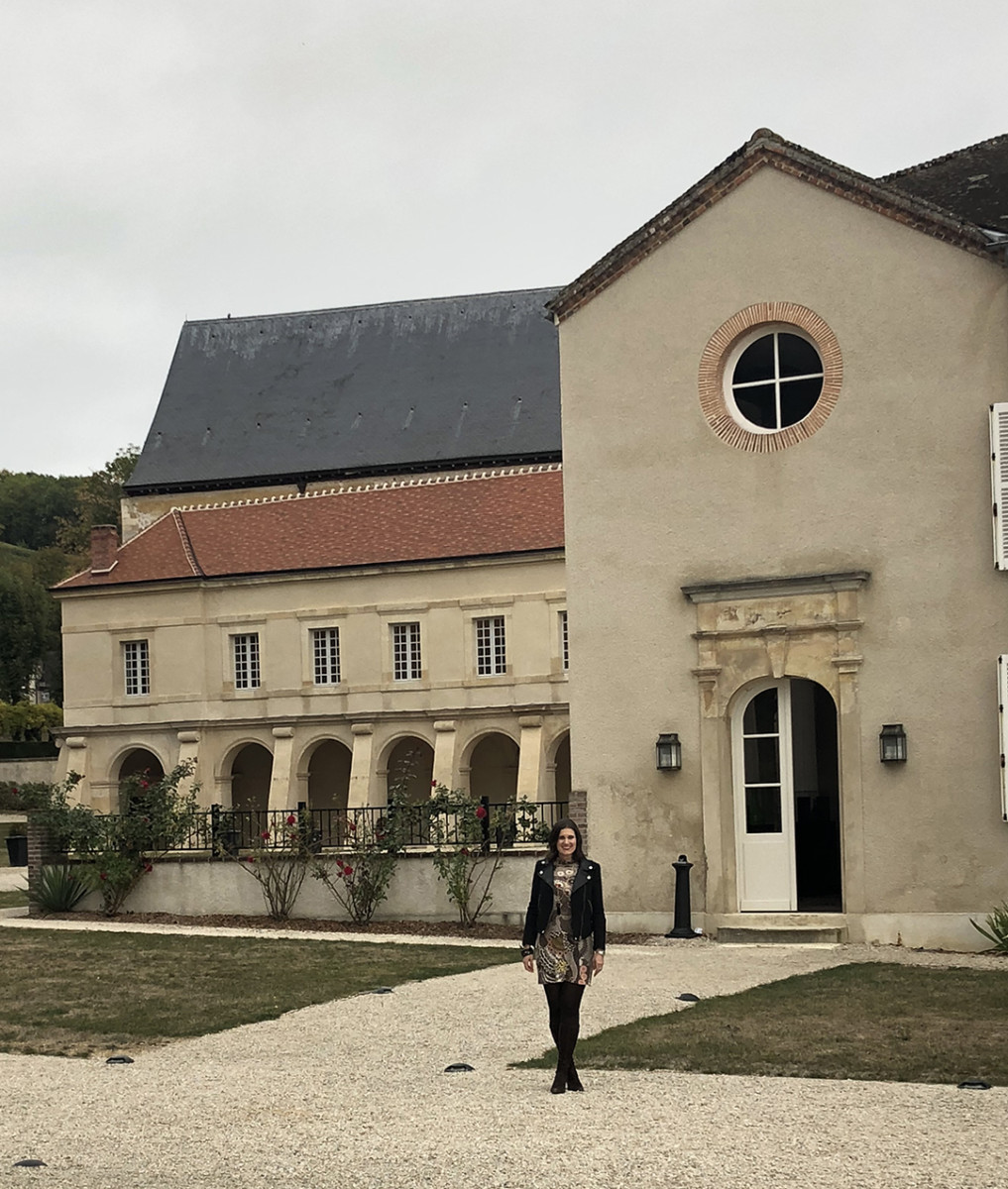 I’m all smiles touring this historic Maison.  What a treat having my first stop during my Champagne tour be at Dom Perignon! 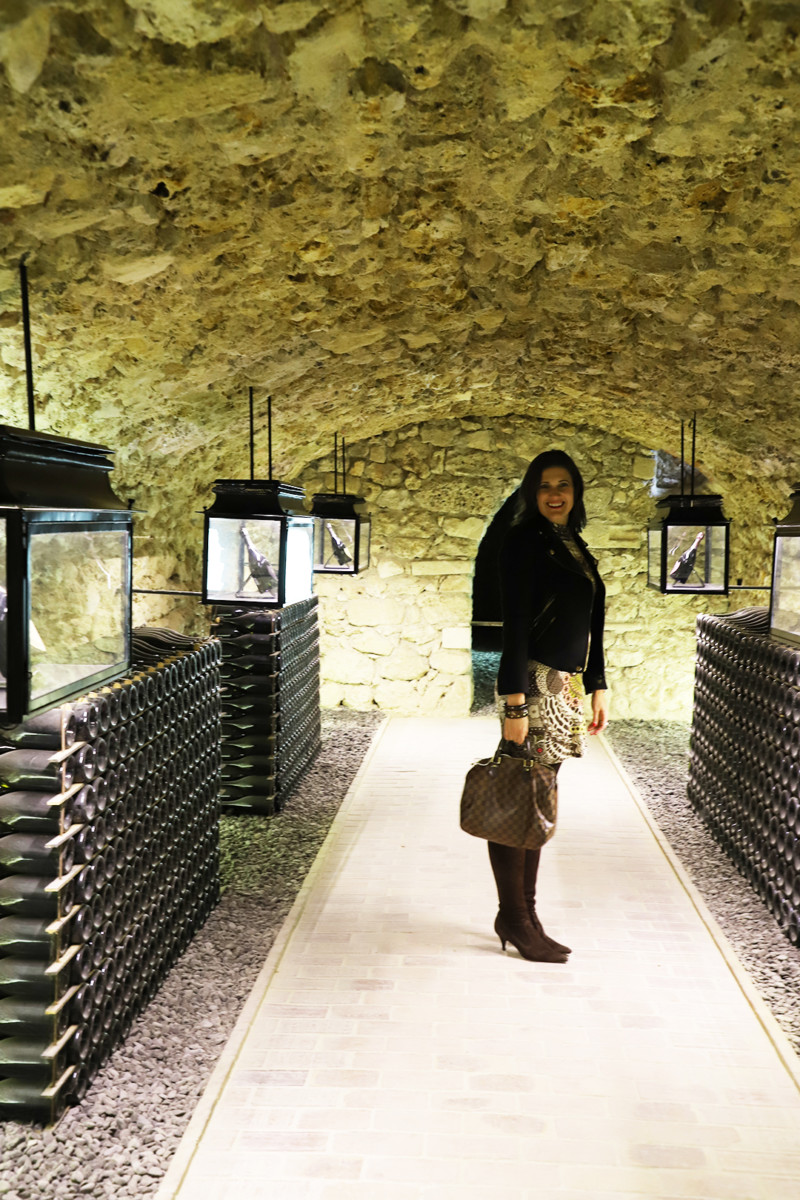 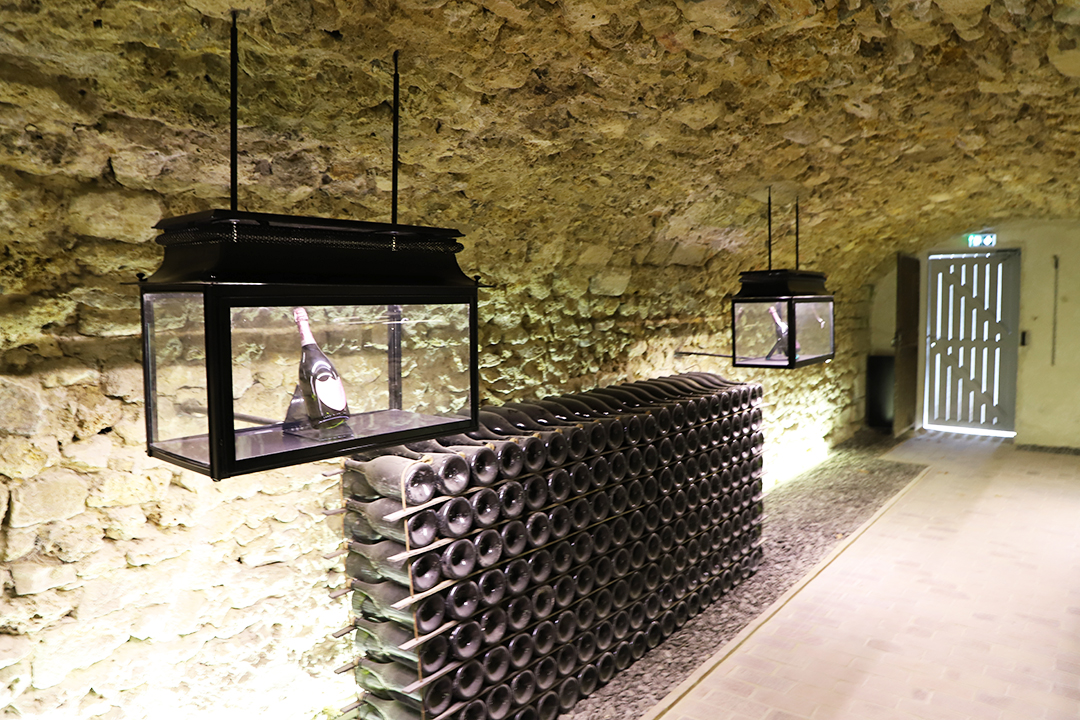 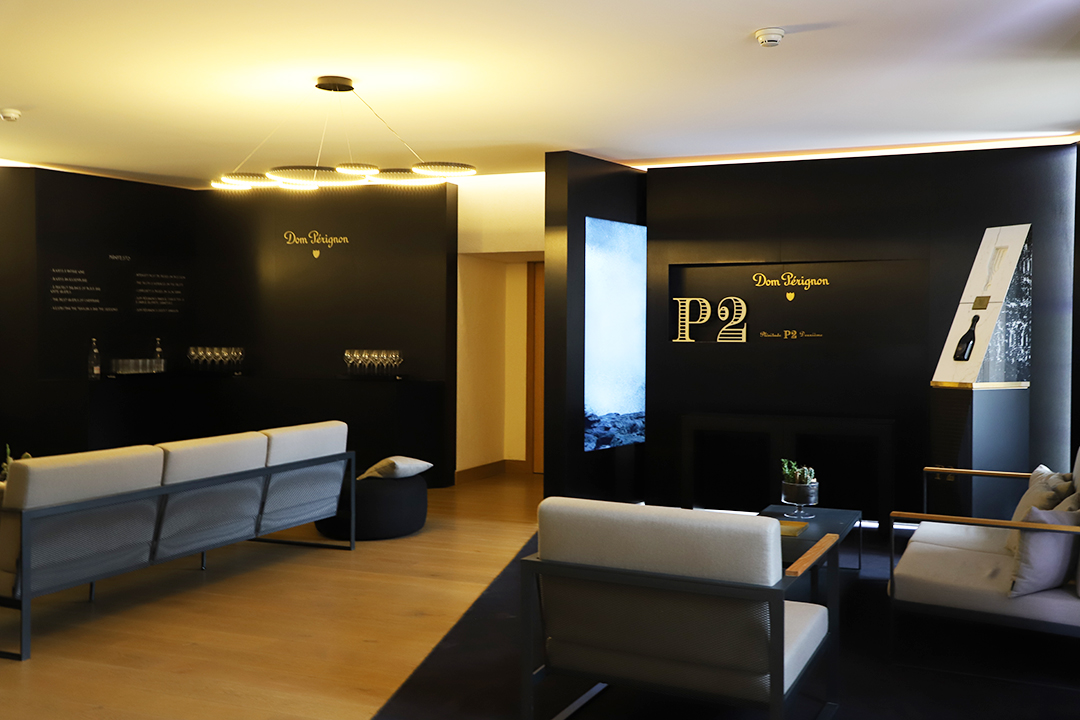 The interior of the Maison where guests are hosted in the P2 tasting lounge. 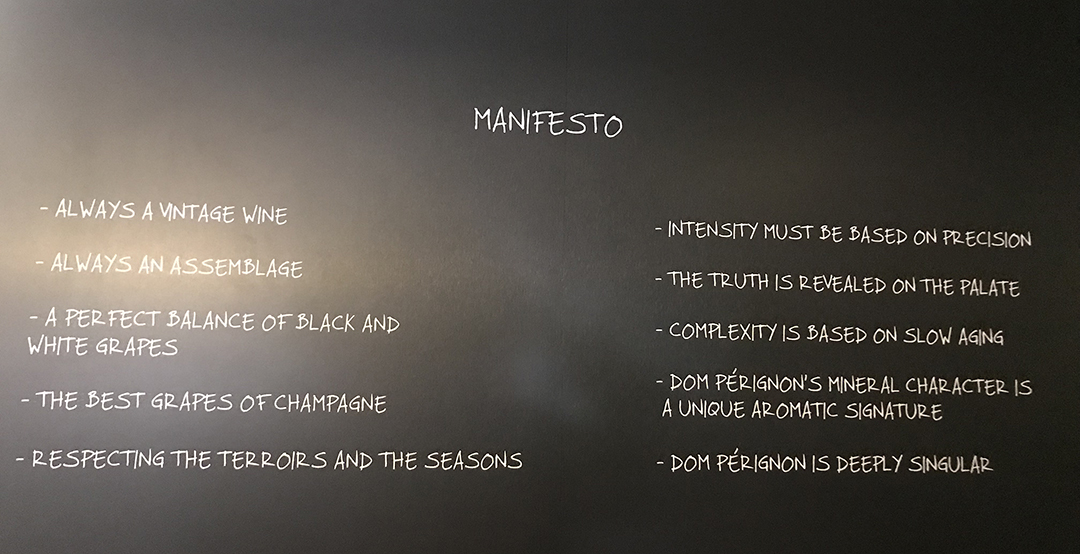 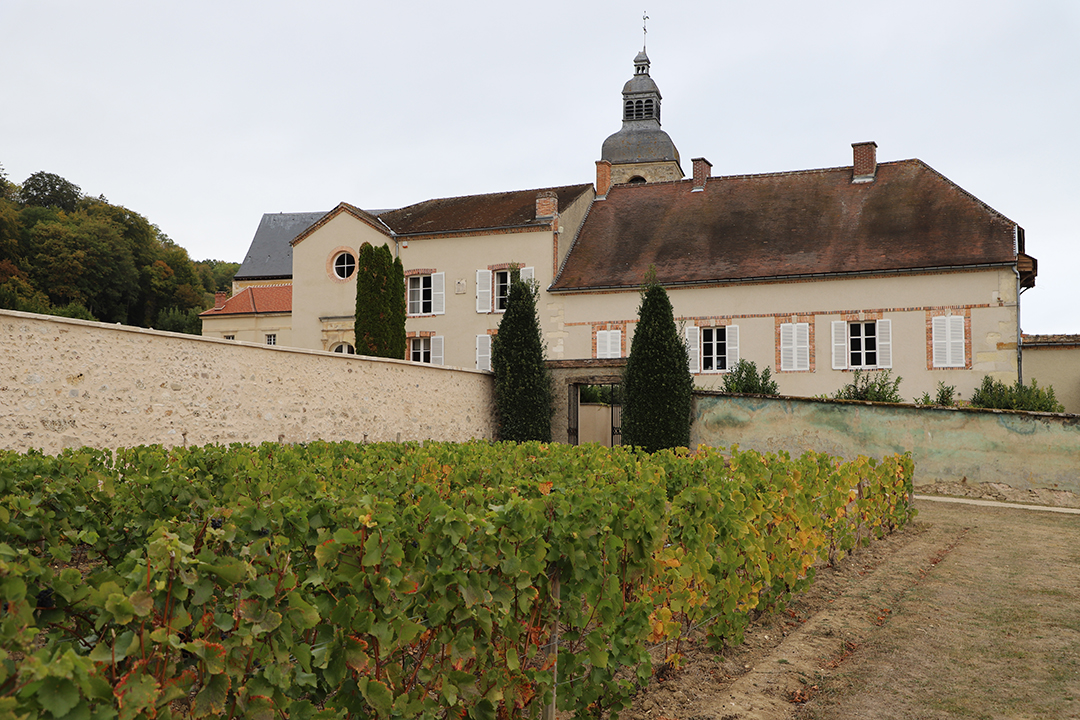 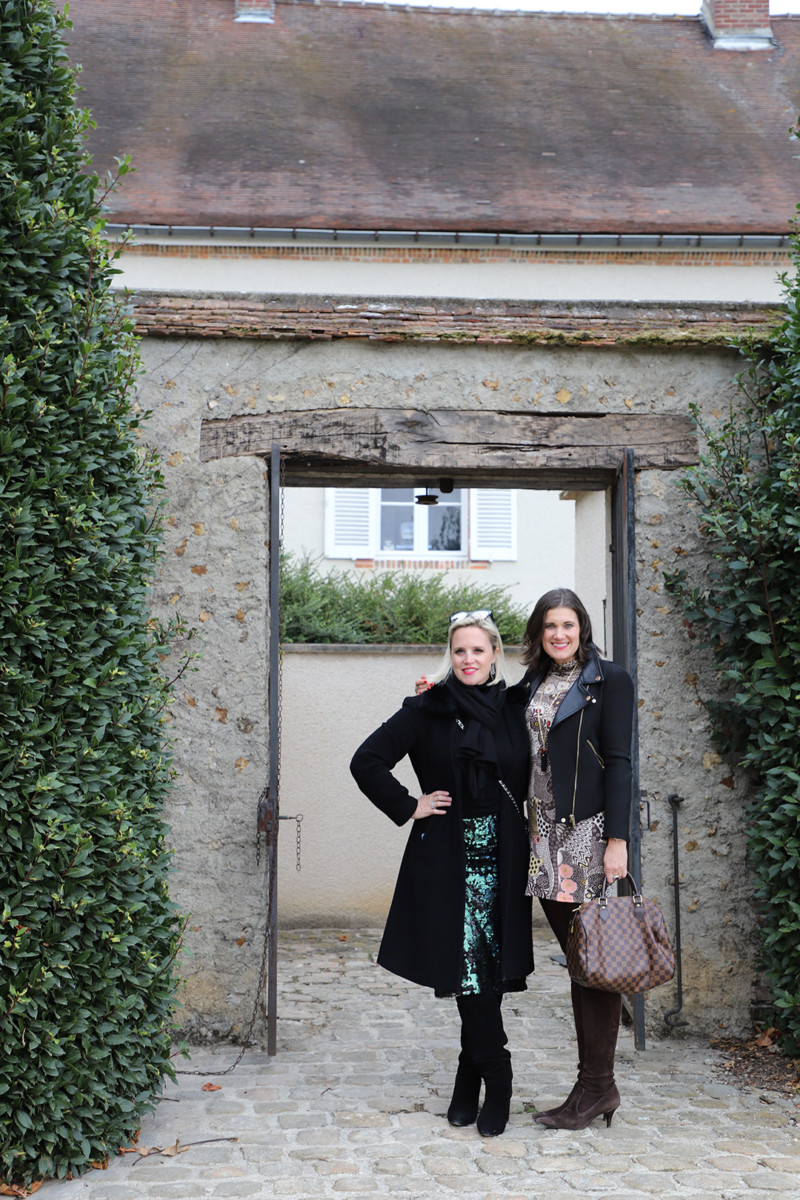 Touring the lovely vineyards with my partner in crime, Kat. 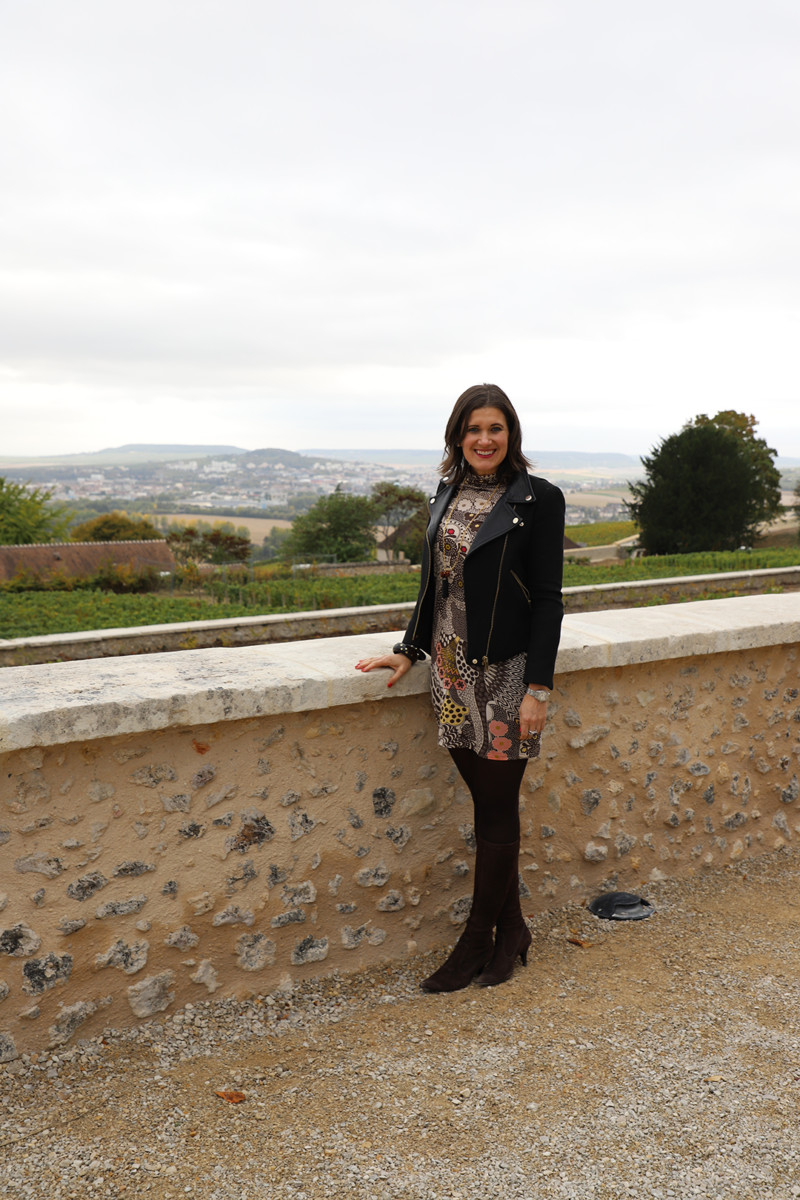 Farewell Dom Perignon! Thank you for the informative, fun and delicious visit. See all the incredible Dom Perignon Wines I tasted during this visit on my next post tasting with Winemaker Nicholas at Dom Perignon coming soon….