Where To Eat in Paris France

I’ve been fortunate and have been to Paris, France three times over the years. Until my recent visit to Budapest I’d say Paris was my favorite European City however after visiting Budapest I think it’s a tie or I may even have fallen in love with  anew European City Budapest topping my love for Paris. Regardless, during my most recent 10 day visit to Paris I found a few favorite spots to dine at that I highly recommend you visit!

Laduree Bonaparte  – Known for having the best macaroons in France (and recently now sold in NY, NY).   There are four locations, the one in St. Germaine is at: 21 Rue Bonaparte, also locations at: Royale, Champs-Elysees and Les Printemps Department Store. My favorite flavor is the Salted Caramel but try the assorted box as they’re all delicious!   21 rue Bonaparte – 75006 Paris, France. 33 (0)1 44 07 64 87. 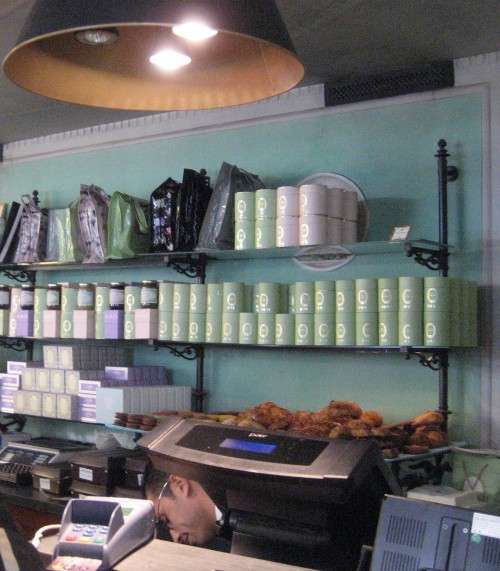 Gorgeous interior of L’Aduree. Even the boxes are elegantly decorated.

Cafe De Flore  – This is where locals and tourists go to have a bite or a drink and enjoy the scenery. This is an oldie but goodie and even the Paris socialites still visit Cafe de Flore for a cocktail to begin their evenings. 172 Boulevard Saint–Germain.

Vinoteca – The BEST meal I experienced in Paris. Ironically it’s Italian but after nine days of French food during a stroll from the L’Arc de Triomph back to our hotel we passed this charming Italian restaurant. We both agreed it was the best Italian we’d had in years. In addition, the manager who also served us was very attentive and helpful.   He made wine and food suggestions pointing us toward the house specialties.  We ate outside on the sidewalk but there is also a nice modern, chic interior for dinner or drinks. 32 Rue De Courcelles. Paris, France.

Berthillon – Best ice cream in Paris! Also the smallest scoops I’ve ever seen (pretty adorable and great portion control practice) but still worth the 4 euros for two mini scoops. Plan a visit here after seeing Notre Dame – it’s behind the church across the river on the Ill Saint Louis Island. It’s fun to grab a scoop and walk along the river. 31 Rue St Louis en L’ile. Paris, France.

Higuma – A very popular, hole-in-the-wall Japanese restaurant known to the Paris locals. Great, delicious, quick, cheap eat. Does not have much ambiance but the food is amazing, authentic and reasonable. It is located in the Opera neighborhood near other Japanese/Chinese restaurants. Known for long lines but they move quickly and it’s worth the wait. 32 Rue Sainte Anne. Paris, France.

Boulangeries Paul (Paul) – This is a delicious sandwich place with multiple locations around Paris. I had the BEST croque monsier ever here (I didn’t know I liked them until tasting theirs). Be sure to visit at least once while in Paris as I promise you’ll want to return. 25 Avenue Opera. Paris, France.

Cafe Divan – Great small French bistro in the Bastille area. Not a touristy spot, but a hit with all the locals because of the very cute scene and affordable prices (for Paris that is!) 60 Rue de La Roquette. Paris, France.