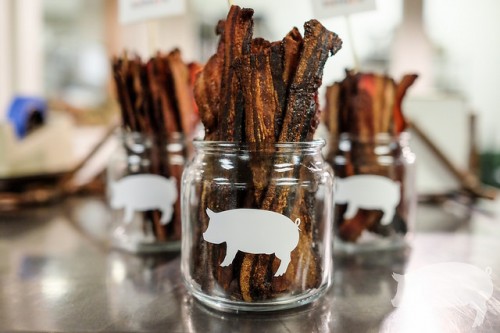 Chefs have seven days to prepare one whole pig and present a “Judge’s Plate” consisting of 6 dishes scored on utilization, global influences, cooking techniques and overall flavor. The winner in San Francisco will be crowned the “BBQ King or Queen” and takes home over $3,000 in prizes. In addition to sampling the competitor’s dishes, the all-inclusive ticket includes “BBQ Traditions”, a tasting inside the event where 10 notable chefs prepare one dish from their favorite BBQ culture in non-competitive spirit. If you love global flavors and star-studded culinary events, this educational event is like a top chef classroom including grilling-styles like Hibachi, Korean BBQ, Asador, Braai from Africa, Char Siu, Caja China, Churrasco, Barbacoa, as well as regional American BBQ styles from Texas to Kansas City. 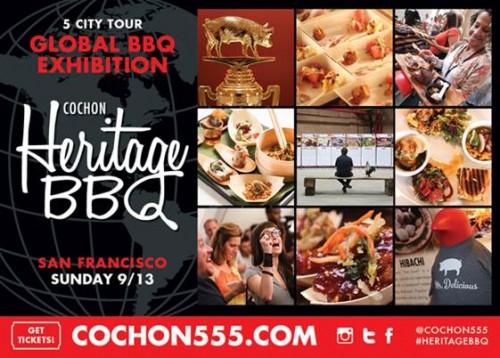 For an idea of what to expect, see some of the recent fun I had with Cochon 555 at their recent Napa Valley Heritage Fire Event in August, 2015.

Tickets for general admission start at $100, and VIP tickets for early admission are $200. To purchase tickets, visit the website

What are you drinking? Magnolia Brewery at Dogpatch will be the Official Host and Exclusive Brewery of Heritage BBQ.

What Chef’s are competing? Dennis Lee of Smokestack / Namu Gaji, Geoff Davis of The Dock, Michael Rafidi of RN74, Nicolai Lipscomb of The Battery, and John Madriaga of Spruce.

How it works: Each chef will be given a 180 pound heritage breed pig to create six dishes for a crowd of pork-loving enthusiasts. 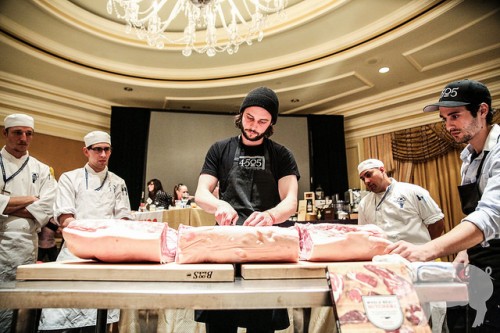 What guests should expect: As North America’s only “World’s Fair of Global BBQ”, guests will have the chance to pair spectacular wines, brews, cider and spirits with globally inspired BBQ dishes. The tour motivates grilling communities worldwide to support responsibly raised animals from local farmers. 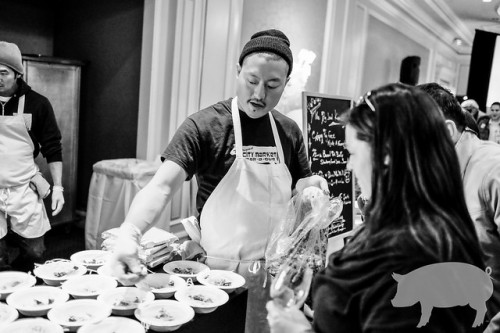 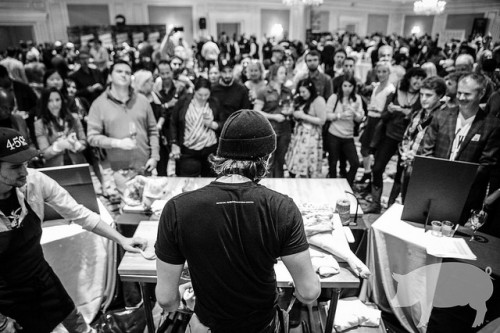 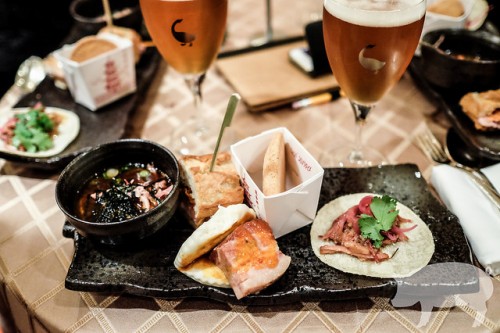 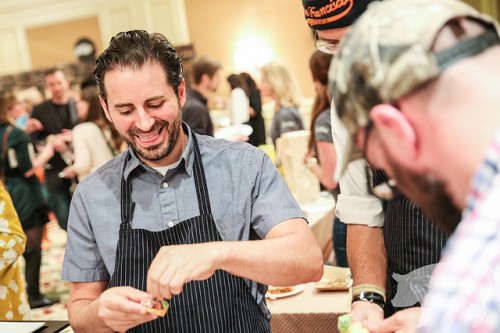 How is the winner chosen? A group of respected judges including Dave McLean of Magnolia Brewery, David Bazirgan of Dirty Habit, and Richie Nakano of Hapa Ramen will be led by Brady Lowe in selecting the winner. Non-competing chefs cooking BBQ Traditions include Jason Wittek of Stem, Jeffrey Weiss of jeninni kitchen and Joshua Schwartz of Del Dotto. 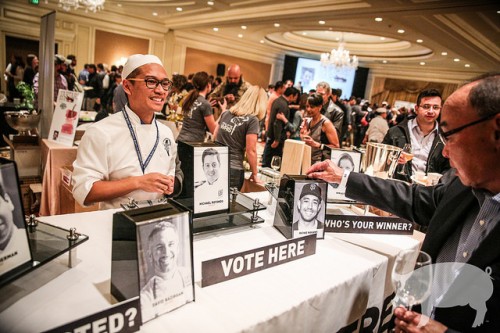 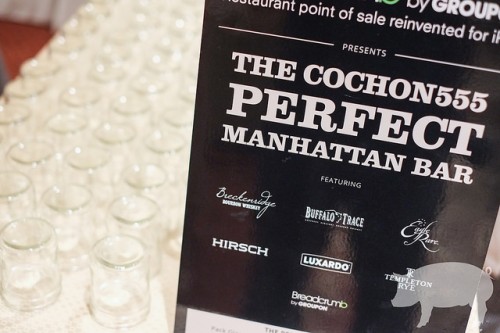 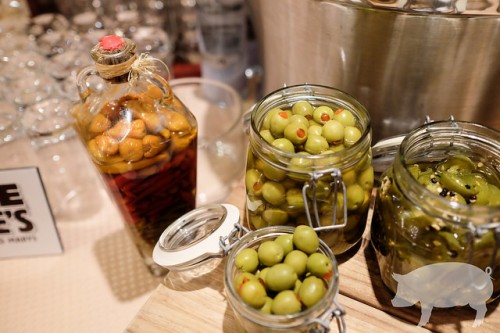 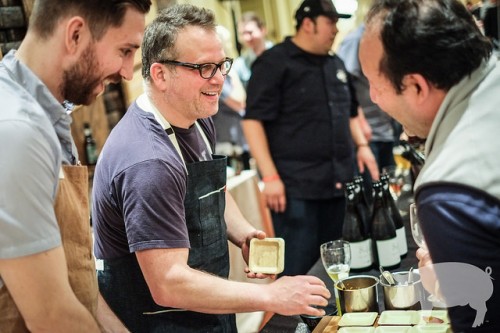 Where the proceeds go: A portion of the proceeds always benefit the local culinary school while building opportunities for local food producers. All tickets include endless drinks and tons of food and are limited to only 250 tickets per event.

Message from Cochon 555 Founder Brady Lowe: “We’re incredibly excited to bring Heritage BBQ to San Francisco for the first time and pay tribute to global cultures by consuming local food the way BBQ was intended to be. Today’s BBQ restaurant doesn’t give us a choice to buy local, safe food with our hard-earned money and we’re on a mission to change that by hosting incredible events that honor the greatest social traditions on the planet, cooking over fire. This event returns the BBQ conversation to the original context of local meats, cooked with native spices, over fires and shared with a community. Therefore, the event will tilt the scales back towards creating long-term relationships for family farms and big protein buyers like BBQ restaurants. It’s only a matter of time until people demand better food choices when standing at the counter.” explains Brady Lowe. “We are standing right there with them, promoting honest food and a choice to buy safe food.”

About Heritage BBQ by COCHON 555: Started in 2012 in an effort to bridge the gap between family farms and all categories of BBQ restaurants, HeritageBBQ by Cochon 555, is the first national BBQ competition dedicated to supporting a new direction for heritage breed pigs by expanding the conversation to a global economy. Created by Cochon 555 Founder Brady Lowe, HeritageBBQ engages existing BBQ restaurants in the local and sustainable food conversation taking place nationwide while simultaneously breaking ground on a new hyper-local, globally-themed, farm-supporting BBQ.

About The Cochon US Tour: The Cochon US Tour executes a variety of unique, local food events that are focused on raising enthusiasm for supporting family farms with the world’s first environmentally conscious nose-to-tail pig competition. The flagship Cochon 555 event is celebrated as the world’s first nose-to-tail pig competition in the fine-dining community. Created in response to the lack of consumer education around “heritage breed pigs”, this epic pork feast visits 20 major cities in North America annually. The US Tour also includes other live-event festivals, these focused culinary expressions include Heritage BBQ (global cultures), Heritage Fire (live-fire event), EPIC Cochon (hyper-premium), and Cochon Island (agri-tourism). The events feature top chefs preparing locally raised heritage breed proteins. Together with winemakers, brewers, distillers and craft food champions, they create authentic culinary events celebrating the good food movement. Since its launch, the tour has supported responsible family farming by sharing heritage breed pig experience with over 50,000, by donating more than $450,000 to charities and culinary schools, and buying more than $1,000,000 in food raised by local farmers. For more details about the events, visit www.cochon555.com or follow @cochon555 on Twitter.

PlumpJack Squaw Valley's Brunch Not To Be Missed