Day 4 of our Route 66 Road Trip from California to Kansas City brought us through Arizona. We were looking forward to visiting the Painted Desert & The Petrified Forest. I had heard of neither prior to the trip (maybe I should keep that fact to myself!) so I was not quite sure what to expect. Although, after a bit of google research I saw the magnificent pictures of the Painted Desert & The Petrified Forest which built up my excitement for this stop.

Upon arriving to the Visitors Center we grabbed a map and chatted with a ranger. We said we had about an hour to drive the park and asked for her suggestions. She quickly gave us her top 5 list and suggested we hit 4 of the Painted Desert viewing points and the closest viewing point of the Petrified Forest. We followed her suggestions and experienced a great range of the Painted Desert sites (ranging from the Pink Mountains to the Blue Mesa badlands). What I found most amazing about the Painted Desert was how there was such a wide variety of natural beauty. The Pink Mountain’s were my favorite (no surprise, Pink is my FAVORITE color) but I still loved seeing the various ranges of beauty within the Park. We even spotted some Deer which is always awesome when sightseeing in a National Park.

For those wanting to see the Petrified Forest, note that it’s Musuem is on the opposite end of the park’s visitor center (where we entered). So, depending on how much time you have you may want to do an abbreviated viewing of the forest. To do this, you would visit the Crystal Forest viewpoint (closest to the Visitor’s Center) which gives you an idea of the Petrified Forest and saves you a trip to the museum at the far end of the park. Petrified Forest & Painted Dessert, Holbrook Arizona. 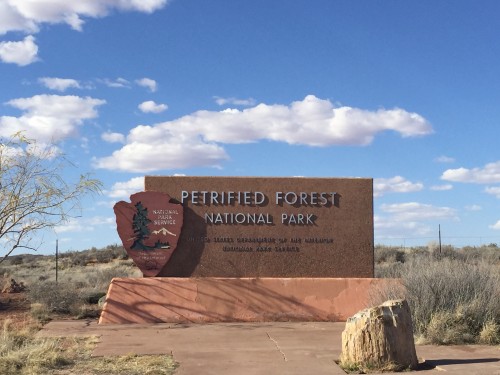 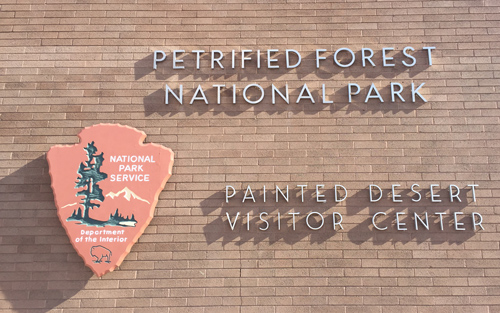 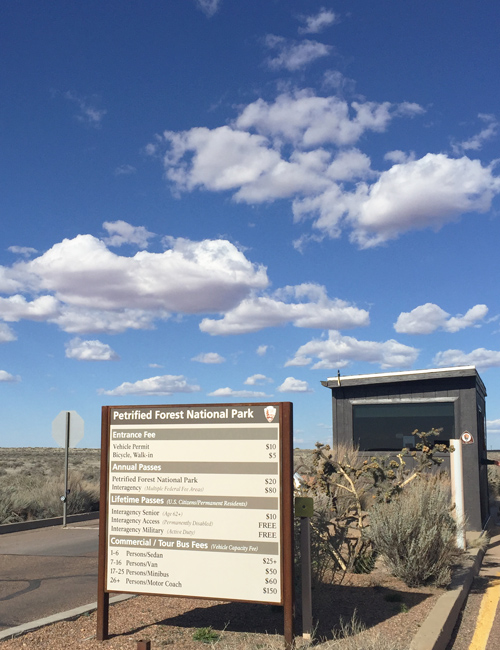 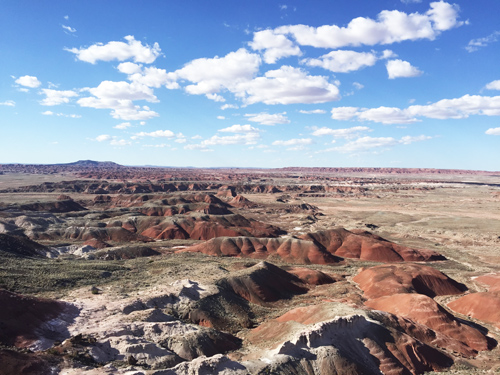 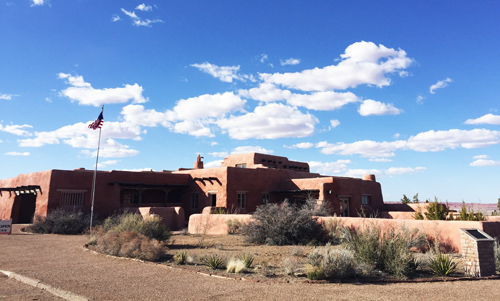 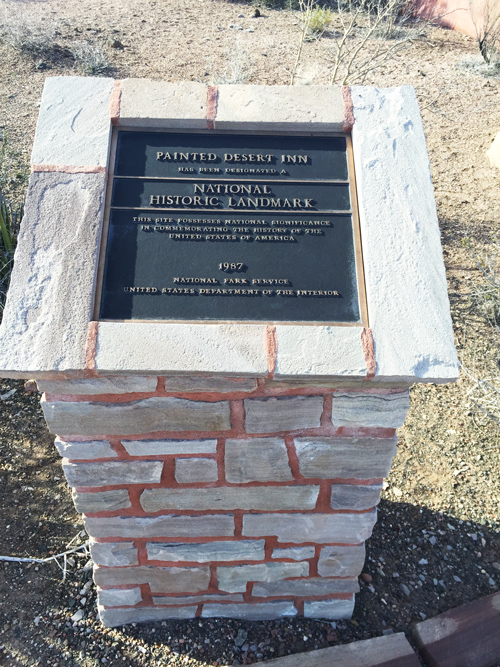 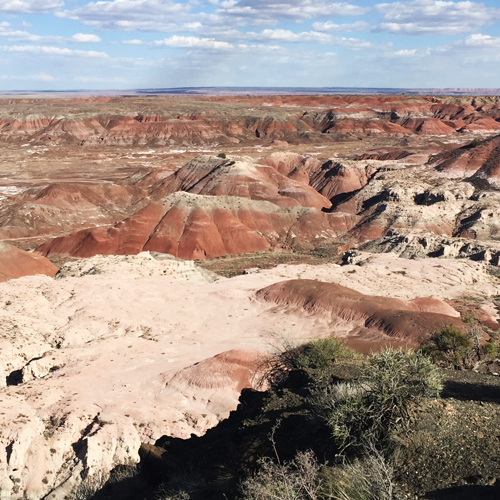 The pink Painted Mountains (my favorites) 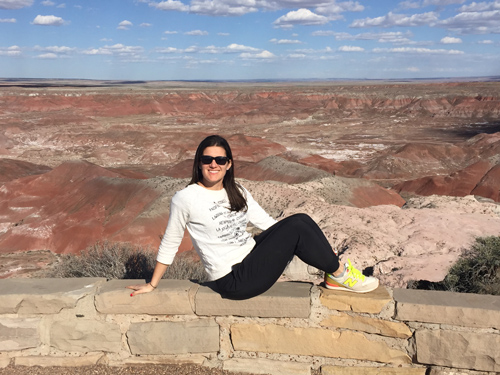 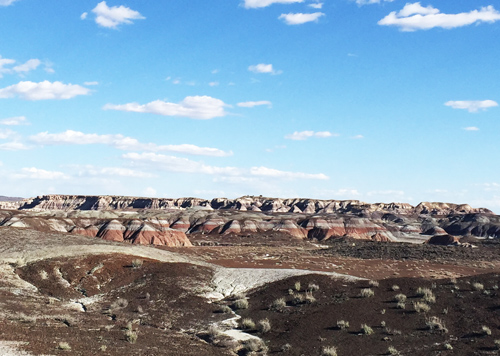 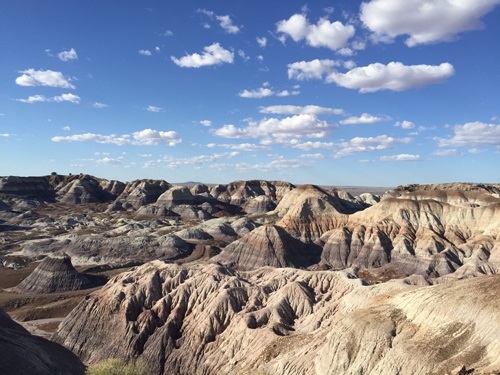 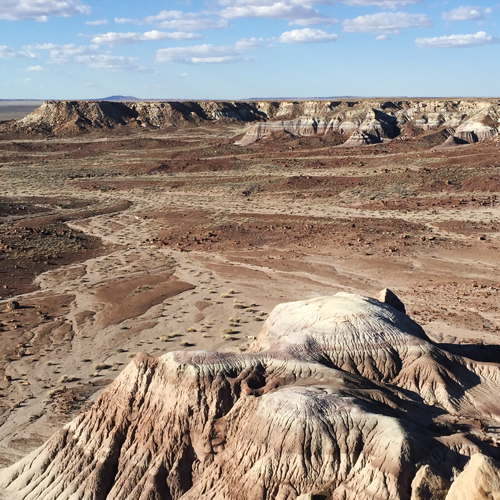 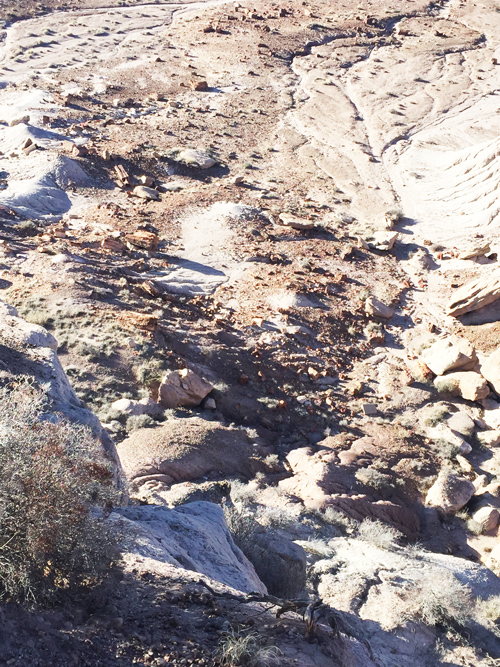 Petrified Forest wood on the ground

Some history about the Petrified Forest & Painted Desert

Averaging about 5,400 feet (1,600 m) in elevation, the park has a dry windy climate with temperatures that vary from summer highs of about 100 °F (38 °C) to winter lows well below freezing. More than 400 species of plants, dominated by grasses such as bunchgrass, blue grama, and sacaton, are found in the park. Fauna include larger animals such as pronghorns, coyotes, and bobcats; many smaller animals, such as deer mice; snakes; lizards; seven kinds of amphibians, and more than 200 species of birds, some of which are permanent residents and many of which are migratory. About half of the park is designated wilderness.

The Petrified Forest is a United States national park in Navajo and Apache counties in northeastern Arizona. Named for its large deposits of petrified wood, the park covers about 146 square miles (380 km2), encompassing semi-desert shrub steppe as well as highly eroded and colorful badlands. The park’s headquarters is about 26 miles (42 km) east of Holbrook along Interstate 40 (I-40), which parallels the BNSF Railway’s Southern Transcon, the Puerco River, and historic U.S. Route 66, all crossing the park roughly east–west. The site, the northern part of which extends into the Painted Desert, was declared a national monument in 1906 and a national park in 1962. About 600,000 people visit the park each year and take part in activities including sightseeing, photography, hiking, and backpacking.

The Petrified Forest is known for its fossils, especially fallen trees that lived in the Late Triassic, about 225 million years ago. The sediments containing the fossil logs are part of the widespread and colorful Chinle Formation, from which the Painted Desert gets its name. Beginning about 60 million years ago, the Colorado Plateau, of which the park is part, was pushed upward by tectonic forces and exposed to increased erosion. All of the park’s rock layers above the Chinle, except geologically recent ones found in parts of the park, have been removed by wind and water. In addition to petrified logs, fossils found in the park have included Late Triassic ferns, cycads, ginkgoes, and many other plants as well as fauna including giant reptiles called phytosaurs, large amphibians, and early dinosaurs. Paleontologists have been unearthing and studying the park’s fossils since the early 20th century.

The park’s earliest human inhabitants arrived at least 8,000 years ago. By about 2,000 years ago, they were growing corn in the area and shortly thereafter building pit houses in what would become the park. Later inhabitants built above-ground dwellings called pueblos. Although a changing climate caused the last of the park’s pueblos to be abandoned by about 1400 CE, more than 600 archeological sites, including petroglyphs, have been discovered in the park. In the 16th century, Spanish explorers visited the area, and by the mid-19th century a U.S. team had surveyed an east–west route through the area where the park is now located and noted the petrified wood. Later roads and a railway followed similar routes and gave rise to tourism and, before the park was protected, to large-scale removal of fossils. Theft of petrified wood remains a problem in the 21st century. Northeast Arizona. Description courtesy of Wikopedia.com